Why Is Video So Important?


I have had so many brides that didn't have video included on their wedding day tell me that they regretted not having a videographer. Photographs capture one moment; video captures 30 photos every second.

Video records elements of your wedding day that still photos simply can't. I've had more than a few former clients tell me that the soundtrack from their video captured the laughter of the reception and the real emotion of their wedding ceremony. A recent bride had someone in their wedding pass away a few months after the wedding. The only video they had of their former loved one was during the wedding. The video captured them talking and having a good time as well as saying a message to the bride and groom -- just the kind of memory you should have.

Video is a documentary of your lives. It's one of the few times that friends and the entire family may be together. We interview your guests so that you will have messages of congratulations that will last forever on DVD.

Most of the videos we edit are "cinematic" in nature. So, what is "cinematic"? Imagine your wedding as a feature film. The story unfolds in video with very little dialogue. Dramatic music builds, creating suspense, drama, and elation as the bride and groom are announced husband and wife. The happy ending is there for everyone to see, and now, let the celebration begin.

For those mothers and fathers who remember what their wedding video looked like, take time to meet with a few videographers to see just how far video has come. It's no longer just a video, it's a movie and your son or daughter are the stars!

In the next few months we will begin to offer high definition video. This is the next big leap in video production. 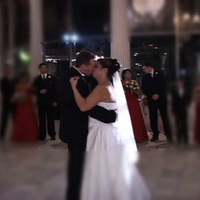 Brent Dunn is with DunnRight Videography based in Largo, FL.

High Definition Cinematic style Wedding & Corporate Video Services. Quinceañeras & Mitzvahs. Imagine your Wedding at a feature film! We can even podcast your video on our website. Watch our Visual Artistry in Action. We'll create a video memory you'll want to see again and again.