Get More Than Expected with a Wedding Video


There is total silence. At the altar the groom awaits his bride. The organist begins the wedding march, the doors open and in steps the bride.

The look on the groom's face as he sees her for the first time is priceless. She enters and then stops, is handed a microphone and begins singing to her groom the song "At Last". His eyes swell with tears. I could hear him gasp through the wireless microphone.

Later after the ceremony they swiftly run down the aisle and before anyone joins them he whispers to her, "That was so beautiful, you made me cry! I knew at some point you would sing today but I never expected it then."

A precious moment was captured and will be treasured forever. They saw the value of having their wedding videotaped.

Maybe it is the romantic in me that leads me to write the following: Everyone longs for a soul mate. Once found, we spend so much time planning for this special day, "The Wedding". For a woman dreams of her wedding day since she was a little girl. Recently my daughter watched my wedding video taken over 20 years ago. We laughed hysterically through much of it. "Those people you see are your grandparents," I told her. These have since passed but what a joy it was to watch and share that with her. Then video was nothing like it is today, most of the video was in black and white and of poor quality. The memories though, the sights and sounds were captured forever.

It surprises me that so many brides place video at the bottom of their budget. While photography is a must right from the start, video is considered much later in the planning and is often left out completely. At a recent PVCJ meeting (Professional Videographers of Central Jersey, an association of wedding and event videographers of which I am presently vice president) we had a seminar on the real value of a wedding video. All were asked if we would buy our grandparents' video would we if we had the chance. And, if so, how much would we be willing to pay? The answers were all "absolutely" and the price, well all agreed it would be priceless.

Then we were asked if we had the choice of buying either our grandparents' video or their photo album what one would we choose. All answered, "the video."

This question was also asked to a panel of couples soon to be married and they also chose video. This is because you cannot hear a picture. You cannot feel the emotions as you do with a movie.

Having been in this business for over twenty years I have seen the bride who can barely breathe as she is asked to turn toward her husband and repeat her vows. Then there is the bride who can't stop giggling. The ring that slid under the priest's gown and the laughter that followed. The mother of the bride gets a face full of cake by the groom. None of these was never expected.

One mother wrote me a letter after the wedding. She said, "I could just reach out and grab that little flower girl granddaughter of mine running through the gardens in slow motion. Terrific! Not to mention my dance with my only boy and joy of my life. I knew they loved each other but seeing the way he touched her and kissed her all day made me feel even happier for them."

Another bride wrote, "Knowing how beautiful the video turned out to be I would have done it three times over. The cost is minimal in comparison to the lifetime of memories it has brought to us." She was on a tight budget yet saw the value of having a video.

Contemplating a video of your wedding? Let me reassure you that gone are the days of bright lights. Today it is possible to preserve the memories while preserving the mood. Choose a professional up to date with technology who has a passion for his work. Take your time when selecting, there is a professional out there for every bride and budget.

Don't miss the chance to capture the day that you and your family for generations will treasure. One more thought... There is someone who is with the bride all day but never gets to see her. If it wasn't for the video this person would never know what she looked like. Who is this person? Listen to my podcast to see. You will want a video for sure. Rarely do we ever get more than we expect... You will with a video. 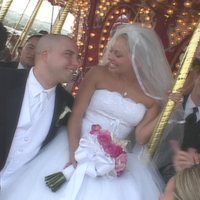 Trish Kondreck is with Videos by Trish based in Brick, NJ.