Those seeking to marry used to have two choices only: a reverend or rabbi of an established church or synagogue, of which one usually had to be a member, or a civil ceremony at the courthouse before a judge. Now there is an expanding gray area between the two with many choices available.

At times this creates a culture clash. A perfect example of this was the bride who had called about my availability to officiate her wedding the following weekend.

"Sorry for the short notice," she began and then went on to explain that they'd just lost their minister. They'd been members of his church for years, she said. But now, at the last minute, he was insisting that her vows include the words, "love, honor, and obey."

I laughed and agreed that it was silly, though some traditional ministers would obviously beg to differ. Common ground is called for in these times, while rigid tradition is becoming a thing of the past. In its place, a couple may create a ceremony that is all their own with the help of an interfaith / nondenominational minister, judge, or civil celebrant. Often the end result will be a mix of old traditions and new ideas, particularly for brides and grooms who are from differing religious and cultural backgrounds.

Some of the sweetest, most touching ceremonies I've witnessed are those with elements honoring cultural customs. I've included a glass-breaking segment for a bride who wanted to honor her Jewish roots. The groom spoke his vows in Dutch, his native tongue, with his mother translating. Another couple wanted a Lasso rite involving the groom's parents, to pay homage to his Mexican-American descent. Some have asked for Native American blessings and rituals, and others, for Celtic handfastings. Then there was the couple who had met in AA and wanted the Serenity Prayer recited.

Theme weddings are also becoming popular. I've officiated at nuptials where everyone dressed in costume -- one at Halloween, and another, a Renaissance ceremony including groomsmen clad in chainmail. Surprisingly, many otherwise free-spirited couples still opt for the tried-and-true, such as the Unity Candle lighting, and the often-quoted scripture verse from the Book of Corinthians about love.

The bottom line is that a wedding can be as solemn and dignified or as fun and creative as the couple wishes. The important thing is that a ceremony reflects and honors the personalities, needs, and hearts' desires of the two individuals who are stepping forward to make this time-honored, lifetime commitment to each other. 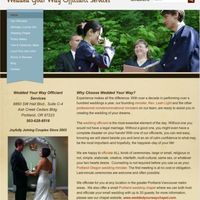 Rev. Leah Light is with Wedded Your Way based in Portland, OR.

We customize your ceremony to fit you as a couple. Our specialty is short-notice “elopements” and small family gatherings, though we perform weddings of any size or kind. We will send one of our officiants to your greater Portland area location--or you may come to one of our two venues: Our courthouse alternative chapel in a pretty, woodsy setting, seats up to 15 guests. A second wine country bed & breakfast, offers wedding and overnight stay packages, and an outdoor option.